If you know Tel Aviv street art scene, you know Dede. Famous for his eponymous band aids and his deformed urban animals that adorn walls all over the city, Dede has gained the recognition of galleries, collectors and art enthusiasts during his years in the art world. His art often deals with social issues that rise in the urban sphere. It acts as a remark or an observation meant to point attention to things that are overlooked during day to day life. It has a good balance of wits, humor and simplicity, always displays elaborate technique and ambition. 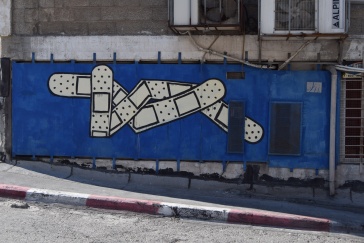 Dede prefers to keep his identity unknown to the public. Luckily for me, our paths crossed, and I have the privilege of working with Dede since. So when I realized a piece commissioned by the Tel Aviv municipality was going to be made, I took the opportunity and asked to join, help and report back.

So where to begin? This piece evokes several points of interest. The location of the piece is as central as it gets, hardly the neglected outskirts of the city where one usually finds street art. The fact it was commissioned by the municipality challenges the consideration of the piece as “true street art”. The subject matter of the piece itself demands interpretation. And lastly – how was this ambitious piece physically made?

The piece depicts a typical emergency stop button, closed in a box, with an emergency key to its left. A graphic geometric version of the common device you might see on any type of public transportation. On his Facebook page, Dede unveiled the piece with this caption “In the heart of the city that never sleeps you can now enjoy the privilege of an emergency stop. Whenever you feel that the everyday tempo is just too much, don’t hesitate to push the button.” This quote gives an initial analysis of the piece’s meaning. With the typical irony in his work, Dede calls us all on our lack of ability to manage our well-being. To all of you who give in to the fast paced city, here is a big reminder, in your face, that you should go slower. However, the meaning is deepened when one considers the fact that the wall in question is that of a local power plant. Perhaps we can read this as an invitation to consider an emergency stop on wasteful and environmentally foul energy, being generated in the heart of the most progressive and metropolitan city in the country. The Tel Aviv municipality, the face of this city, is perhaps held accountable for using a building in the city’s center as a power plant rather than a communal space, thus adding insult to injury. More of Dede’s pieces invite an environmental criticism interpretation so to me, as close follower and fan of his work, this seems like a probable analysis.

And for that matter, I believe this critical content prevents, to some extent, the claim against street art funded by institutions. The fact is that art rarely provides messages that are completely clear to its audience. It does however, raise questions. Open art is widely deemed as good art. So if a practicing member of a non-conforming genre of art happens to find a way to evoke such critical interpretation while he is promoted by the subject of said criticism that is a wonderful achievement. This achievement has been attributed to the greatest artist in history, so perhaps municipal street art isn’t something we should dismiss so quickly. This similarity between the achievement of a street artist and artists rooted in the art history Kannon helps broaden the scope in which we view street artists and their work today. It suggests we reexamine the role of the street in street artists work and question the medium-based division we apply for these artists. Should we call Dede and others “just” artists? Would we call a painter who has always displayed work in galleries a street artist if he painted a mural on the street? No answers for these questions exist however the good thing is that they are being asked. 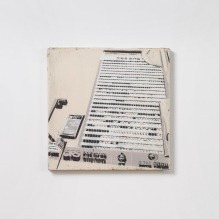 The critical value of this piece wasn’t the only thing that impressed me. The physical process of creating the design was anything but simple. The piece is made of several layers of circles, text and wood accents along with the red box element on the left. The entire wall of the building was coated with a silver layer of spray on the first night of work. On the same night, the box on the left was sprayed red. The second night of work brought an unexpected mishap. Moments before work begun the many stencils needed to complete the piece were laid at the entrance of the adjacent building. Suddenly water began pouring all over the stencils, thanks to a tenant washing his apartment. Improvisation skills came in handy, and a blow dryer given to us by the guilty tenant managed to selvedge the stencils. His wife felt so bad she brought us warm tea all night. With dry stencils, the work could begin. 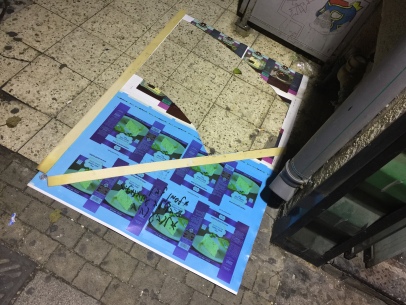 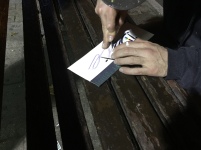 The circles at the base of the composition were created using custom made calipers that Dede created. Who said artists aren’t good at math?! Being modular, the calipers enabled the making of both circles in the piece. After the circles, a combination of free hand spray strokes and stencils of different shapes were added to enhance volume and depth. Next, the text stencils were positioned. This took a long time as we needed a look from the other side of the street to confirm the placement was exact. Running back and forth across the busy street about a dozen times, we finally were able to set the stencil at the right place. A solid layer of spray later and the text was set. Finally, wood accents were added, meant to depict the screws closing the button box and its key hole. As for the key, it was created with tape and a stencil on the red box, along with a second dynamic stencil and free spray strokes that depict the glass. This entire process took three nights. The amount of plans and preparations needed to execute this piece almost made me forget how creative it is, and how effortless the outcome seems.

This was the first time I witnessed street art being made. It left me with a stronger appreciation of the artists that generate it, the people that witness it and its artistic value, which appears to be more relevant than ever. Not only for its content and the thought it can evoke among people, but for the challenges it offers to the contemporary art world and to the discipline of art history.

The Alternative Tel Aviv blog aims to bring the latest news and trends in the fields of urban culture, art and life style to it's young and sophisticated fans and followers. Blog posts are about street art, graffiti, street fashion and urban life style in Tel Aviv, Israel and worldwide.
%d bloggers like this: